Exciting news! We are going to have a baby. Lily had her second check-up with the doctor this month and we saw the baby through the ultrasound and heard a healthy heartbeat. This baby is the Lord’s gift. In China, we were told by the doctors that we wouldn’t be able to have kids. I guess it is always good to get a second opinion, so we consulted the Great Physician and sat in His waiting room. We know a lot of people had been praying for us and God heard those prayers. Lily is quite confident that our baby will be a boy, but the doctor said it too early to tell. We will keep you all updated.

We enjoyed a week up in snowy Montana with family and friends, and after that we headed back to Georgia for the Our Generation Conference. The conference was great! It brought encouragement and challenge to refocus our hearts and minds on the task at hand of reaching the world with the gospel.  There were many who made the decision to go wherever God would send them. A few even expressed that they felt God calling them to China!

Please continue to pray for safety on the road and for more supporters. We heard from some churches this month who joined with us and we are thankful for that. We are especially thankful that the Lord is coming back and that He is going set this world right. Until He does, let us keep laboring for His kingdom.

A Reason to be Thankful

We had a great Thanksgiving with friends sharing what God has done. A family here at Vision opened up their home to us and some friends who needed to hear the gospel. One of the couples who came were the owners of a Chinese restaurant. They were always too busy to come to church or attend our outreach activities, but since Americans don’t eat Chinese take-out on Thanksgiving, they closed their doors and came to join us! After the meal we had the chance to share with them (in their own language) the gift of God.  On that evening, they heard that Christ came into this world to take away sins and to offer them the hope of heaven. What a day to be thankful for! Pray that God would cause the seed which was sown in their ears to produce fruit in their hearts.

Thoughts for the Season

The world is “celebrating” Christmas without knowing the Christ who came as a babe, lived a perfect life, and was broken and offered up for the world, so that now Heaven’s doors are opened wide for those who trust in Him.  Let us use the activity of  the season to let our lights shine before men so that they can come to know Him and celebrate the gift of salvation. Consider what Jesus said in Mk 5:16 to the man who received mercy…

We were in a total of fifteen churches last month which put us in NC, MS, GA, SC, KY, and FL. Some people wonder why we don’t book the whole month in the same place. Believe me, we would in we could!  We are thankful for the churches deciding to partner with us. Pray for safety on the road.

Montana here we come!  We plan to spend a week in Montana with family, and then we’ll be back in time for the Our Generation Conference (Jan 2-4, 2020). Once that is done, we will be back with fingers on the phone and tires to the trail.

The Road to China

I grew up near the mountains. On some winter days we’d drive to a ski area for a day in the snow. The road up there was a bit windy, slippery and peppered with potholes, but that didn’t deter us. We could see those mountain peaks fixed in the distance and our hearts were set on the destination.  Deputation has been a blessing and we have had a great time fellowshipping with so many believers in churches along the way. Although the process of booking meetings and raising support can get wearisome, yet just like the peaks in the distance, we have to keep our eyes constantly on our destination.

How the Lord Led Me to China

(Continued…) It wasn’t but a year after I prayed about China that I had quit my job and was back in school.  My first exposure to Chinese was a two month intensive summer course that packed two years of language into two months. That was the most challenging summer of my life.  After that summer, I heard about a foreign exchange scholarship that would pay for a year abroad at a Chinese university. I jump the opportunity, and the Lord granted it to me. I spent two years in the city of Tianjin studying Mandarin and learning about Chinese culture. That was the Lord’s path to send me to China and prepare me to share the gospel with the Chinese in their own language. There is nothing more exciting to talk about than that!

The Road to China

Back in 2001, I remember praying and asking God to send me to China. When I prayed that prayer, I had not taken any thought as to how I would get there, but God had a plan. At that time I was working at a job that I didn’t really enjoy. I felt restless and had a desire to serve the Lord in some other capacity. About that time, I was reading about Jim Elliot, missionary to Ecuador, who had a passion to do something for God. I also had a desire to serve God, but I didn’t know what God would have me to do.

I started looking for a new job. I took afternoons off work to go interview but had no success. It turned out that God had other plans. One day a former employee stopped in our office for a visit. He told me that he quit his job to study linguistics. His goal was to learn languages of people groups that did not have the Bible so that he could translate it into their languages. That amazed me! It was on that day that the Lord put it in my heart to go back to school to study language. To be continued…

We had our yearly missions conference on September 12th -15th back at our home church in Alpharetta, GA, Vision Baptist Church,. This year’s theme was NO OTHER NAME.  What a blessing and privilege it was to be able to speak and share our burden for China with our friends and church family. We were greatly encouraged also by the testimonies and challenges from the Word of God shared at this conference.

It has also been a great privilege to travel to the many different churches on our deputation so far. So many churches are laboring together with missionaries, holding the ropes for them, so that the NAME WHICH IS ABOVE EVERY NAME can be made known.

Pray that we can raise our support quickly to get back to China.  Pray that we will have safe travels on the road.

Part of the Family

We are now well into our second month of deputation. Booking meetings and hitting the road are the new norms. So far it has been a great experience traveling from church to church talking about the need for the gospel in China. Along the way we have met some great people and heard some encouraging testimonies.

I met a young preacher who told me about his early years growing up. He explained to me how he was neglected and unwanted by his family and was given over to foster care. Somewhere along the way he came to hear the gospel of the one who “loved us and hath given himself for us.” Today, this young man is a child of God and preacher of the gospel that says through Christ we can be reconciled to God and made a part of his family. This is the message that God has for the world. Pray that we can raise our support to get back to China to reach people who are alienated from God with the message of salvation in Jesus.

Tell what God has done

Lily has been doing a great job on deputation. Before arriving in the U.S. last July, she didn’t speak much English. She has really been putting forth a good effort to communicate with people and sharing what God has done in her life. Not only that, but she has also greatly improved her driving skills, and that has been a big help. Please pray that we would have safe travels and stay in good health, so that we can raise our support.

Congratulation! You get to read the first prayer letter of our ministry. Speaking of prayer, this morning I was just thinking of how God has answered a prayer of mine. I remember asking God if he wanted me to go to China. I said “Lord I want to serve you, and if you want me to go to China, then send me there.” It wasn’t but a half a year later that I had quit my job and was back at the university studying Mandarin, and a year later would be off to China. It was there that Lily and I met, got married, and God began moving in the direction toward full time ministry. It seems God’s answer to that prayer was “Yes!”.

Lily and I had a chance to visit some great churches these past couple weeks. One of those churches was a church family in Cherokee, North Carolina. What a blessing to hear some of the Cherokee people sing to the Lord in their native tongue. It reminded me of those words in Revelation.

“After this I beheld, and, lo, a great multitude, which no man could number, of all nations, and kindreds, and people, and tongues, stood before the throne, and before the Lamb, clothed with white robes, and palms in their hands;”

What a day that is going to be! Today we can get a little foretaste.

Back on the home front, My wife Lily, who is from China, and has only been in the U.S. for less than a year, passed her driving test, and she is now legal to take the wheel. Something tells me that our deputation trails will allow her lots of opportunity to sharpen those driving skills.  We have learned a good driving secret, too. If you put “student driver” stickers all over your car, people fear you and don’t come near you. 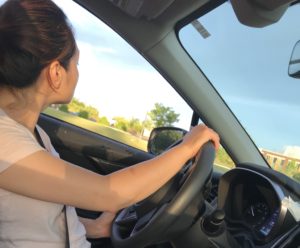 Please pray for us as we drive to different churches to present our desire to go to China and tell people about a risen Savior. Pray that we can be an encouragement to others, and to stir people’s hearts for China and for world missions. Pray also that we can raise our support quickly so that we can get back to China.

We are seeking to book meetings and mission conferences between now and the end of 2020.  Raising our support as soon as possible will help us get to the field so that we can begin laboring in a country where the harvest is plentiful! Would you consider joining us?